When Bloom takes out a knife the situation becomes more serious, Calabro’s hopes and expectations for how the evening would go seem to be entirely dashed. Clancy’s lighthearted script has the potential for glib satire, the premise a clever and quirky tale only a tad hindered by Bloom’s unnatural periodic stutters in delivery and Calabro’s slightly predictable character choices. All in all, a charming story with only a few bumps along the way: nothing a good ‘whipping’ into shape can’t fix.

“Déjà  Who” is a four act play with the hopes and dreams of being with the one person we yearn for no matter where in the universe they may be hiding.

A funny, charming and witty play about Heaven, karma and soul mate relationships  — dead or alive — is just the ticket for those interested in the esoteric world. A topic of recent great interest.

Edward Eriksson is a gifted actor as well as talented playwright leaving the audience questioning “is there a Heaven or something more mystical happening on this plane?”   Marc Gettis’ deadpan delivery was hilarious and if I didn’t know that Meg Ryan was still alive I would swear Gabrielle Brown was Ryan’s incarnate, not only does she resemble Ms. Ryan but has that sweet and bubbly manner about her.  Gabrielle is a natural on stage without trying to convince the audience she’s an actress.

Julia & Buddy is a play incurably plagued by the author’s literary obsessions, lack of chemistry, and void of storytelling.

It saddens me to come down so hard on writer/director N.G. McClernan, who has dedicated countless admirable hours helping fellow writers on nycplaywrights.org. She’s not the kind of person I would peg for an infatuation with nihilistic German philosopher Arthur Schopenhauer; McClernan’s play so relentlessly revolves around his writings that the story of an agoraphobic philosophy professor and a brain-damaged actor/handyman serves as mere lubricant to discuss the author’s topic du jour.

Lead actors Claire Warden and Matthew DeCapua have no time for romantic friction as they struggle through the stodgy script. Julia and Buddy begin a romance when Buddy tries to fix the front door to Julia’s apartment. Warden’s Julia must choose between her affection for the plainspoken Buddy and her intellectual superiority complex. DeCapua’s Buddy is not so much a character as a myriad of unrelated character quirks, making his pursuit of Julia vacant, terse, almost predatory.

The play gives no reason for Julia to actually like Buddy aside from his ‘cute butt.’ (mentioned ad-nauseum) McClernan is content to slap acting a few seizures onto Buddy’s backstory and call it a day, but what he and Julia actually do or want for one another (aside from very good sex) is non-existent. With no compelling reason for the pair to be together, McClernan gives us no desire to watch her lightly-camouflaged philosophy lesson unfold.

Julia & Buddy is practically Kantian in it’s mission, discussing Schopenhauer ‘though the world (of the play) burns.’ Julia even has hallucinatory discussion with Mr. Schopenhauer a la 33 Variations, but unlike 33 Variations in which a cancer-riddled character careens towards death, Julia & Buddy gives us no stakes to speak of, only forced relationship conflict, uninspired revelations, and bookish wheel-spinning.

Appropriate that a play about Schopenhauer would be a trivial hour of agony. A tragic misfire from an artist so deserving of respect. I can only hope this play has helped Ms. McClernan iron out her philosophical kinks, clearing the way for more cohesive work in the future.

The cultural significance of Comfort is undeniable. This play is an imaginative form of docu-theater written and directed by Jung Han Kim about sex slaves kidnapped from Asian countries, like Korea and China, for the comfort of Japanese soldiers during World War II. These women were drugged and defiled 50 to 200 times a day, and then their pain was concealed from Japanese history books. The world has since remained ignorant, for so many years, to the suffering of hundreds of thousands. Now, there are nine known survivors living to tell their stories, which Kim shares openly and compassionately.

The play follows the frustrating circular conflict of the main character, Peter, a passion-crazed drug addict who dreams of a World War II sex slave named Roksun. He wants to tell her story through a documentary he’s spent 4 years making, but his producer, John, played by Lucio Fernandez doesn’t find it entertaining enough for television. Yet, Roksun still appears in his drug-induced dreams and haunts him to make the film his heart wants to be made.

Certain theater elements succeeded. The ensemble’s ribbons-for-chains that entrapped Roksun in a hazy, terrifying grip were an excellent visual connection between her and the pain of other victims. In the audience, I wanted to grant her the mercy she never received and free her from her experiences. On the other hand, I was incredibly disappointed to see that Asians were completely absent from the play. For a story so rich in Asian history, the story would have seemed more genuine if casted with Asian actors and dancers.

Additionally, the play told me about some extreme hardships, but did the minimal amount to show me. I wanted to see, not hear, about how the government is covering up the existence of sex slaves during the war. I wanted to see, not hear, the despairing moment when Roksun was forced to leave her country. I wanted Peter to leave his apartment and share his story with people on the street. If he’s really that desperate for people to know, why is he sitting at home taking drugs?

Article by Ashley Hutchinson On Sunday July 6th, the Midtown International Theatre Festival, a force to reckon with in the vast universe of New York theatre festivals, had its opening night. The festivities began with a short comical opener by Louis S. Salamone, the master of ceremonies detailing the top ten strangest emails received that day. Given that this is an event created entirely by avid theatre lovers, actors, directors and the like it was hardly surprising that this sort of bit would be well received based on the reality: theatre people are specific, and they like emails. The emails relayed to us included questions about the availability of bathrooms or if they would “have to provide jars to pee in” or if cannibalism was legal in the state of New York. I heard remarks around me asking if these questions were fabricated and I wouldn’t be surprised either way. Believe it or not, weird theatre-makers exist, and believe it or not, people would fabricate anything to get a laugh. Though I will say the question still haunts me. With this short introduction out of the way and with the passing of the microphone to the head of the festival, John Chatterton, we were given some background on this year’s festival. Chatterton boasted the festival’s new variety of acts (and rightfully so), as there will be a new cabaret division opening this year joining a commercial division, a short plays division, and so on. The festival will have roughly 212 performances this year, that being said Chatterton’s message to “get ready to see a lot of theatre” was extremely appropriate. 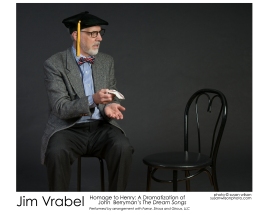 The ceremony then continued in an intimate way, the feel was that of theatre-makers performing for fellow theatre-makers and some avid theatre-appreciators, and the diversity of acts really was impressive: we were to get a taste of the different shows and performances happening within the festival. I felt like an Alice transported to a very artsy wonderland. The performances began with a jazzy cabaret act titled “An Evening with Rosemary” and continued on with a poetry recitation including various hats, the inner musings of a Stripper, and musical theatre songs about Star Trek.

How these 23 performances landed in the same showcase is a feat that only a theatre festival can truly achieve, and is part of the joy and slight terror associated with seeing live theatre. I was surprised by the amount of the one-man shows in the evening, but with hits such as “Buyer and Cellar” (at the Barrow Street Theatre) and “Murder for Two” (just closed at New World Stages) coming to the forefront of New York Theatre culture the new motto seems to be less is more where casting is concerned. A lot of the work proved very experimental as well; a performance from “Pistrix: A Melancholy Fable” included well-timed choreography with flashlights and the shocking yet appropriate lack of clothing in “Chenel Star! My Journey Through the Strip Club” was bold and fiery.

All in all, it was an affectionate and appreciative night. A small event, but the Festival will be achieving big things through August 8 at 312 West 36th Street.