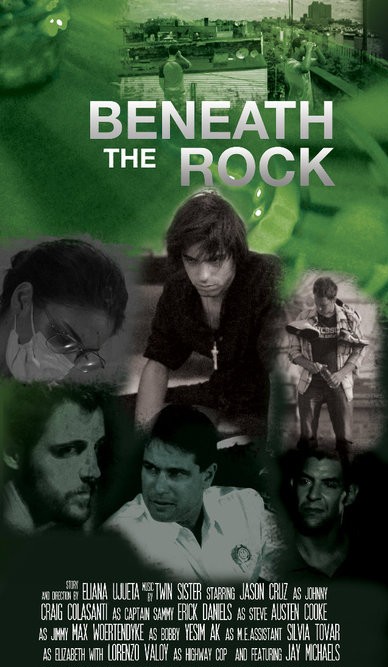 Eliana Ujueta is a filmmaker worth watching! Her film, “Beneath the Rock” is well made. It is realistic, naturalistic, and has good pacing. It held my attention and curiosity for the approximately 72 minutes running time.

It is about the corrupt cops and young hoods on a block in Bushwick, Brooklyn. The people in the neighborhood know the cops are the bosses and the young men in their 20’s work for them, running an underground casino and keeping other gangs out of the neighborhood. They have an intricate surveillance system of video cameras and rooftop look-outs.

The film begins with a voice-over narration by the lead character, Johnny Calas, played sympathetically by Jason Cruz stating the location, setting and ambience of the story. The action begins when his 12 year old sister Cherry, played nicely by Marisa Finazzo is kidnapped. This sets in motion a series of beatings and killings among the gang members. There is no honor among these thieves.

This film is good cinema verite. The shoot was done realistically on location in and around Brooklyn; the characters, dialogue and action were simply and directly presented. The production values were very good. The acting was very natural and the actors made these evil characters sympathetic and appealing at times. Eliana Ujueta wrote and directed with a clear, firm and consistent vision. All of the featured and supporting cast members were effective in their roles. The closing credits and music were appropriate. Everyone was given nice, individual credits. I wish these were accompanied by small photos.

Sunday I had the privilege of attending The Short Play Lad, produced by John Chatterton (producer and founder of the Midtown International Theatre Festival).
First I commend Mr. Chatterton for creating an environment for budding writers to showcase their new works and actually see their pages come to life. In the same spirit as the MITF, The Short Play Lab makes it extremely easy for the new writers to participate by making the rules dummy proof and keeping cost to a minimum.

That said, reviewing both productions was an exercise in discipline and a learning experience.

The Lab was broken up into two programs of eight short plays each. Some of the subject matters chosen by the writers were intriguing like The Panopticon by Andres Anton Diaz– a story about Modern Greek fraternities and the hypocrisy within their culture. A Pig Dog Kitten-ish Breed by Rebecca Lee Lerman– a realistic view of siblings and their co-dependencies. Menage A Twat by Gregory Cioffi– which highlights the one of the basic pitfalls relationships when they become serious too quickly. Shangri-La by Blake Walton– a classic touching tale of late blooming. What stood out to me was Mandy and Madeleine by Michael Newman. The dialogue in this short had organic movement and rhythm. Perhaps Mr. Newman would consider handing it over to another director which could add another dimension to the piece which comes from allowing that third eye input.

These Labs are not all pretty and fabulous but then again they aren’t meant to be. It’s an exercise and process allowing writers to see the potential that lies within. Most would benefit from rewrites and tweaking. Some unfortunately were no more than self-indulgent moments of exhibitionism. With productions like these you learn to chew the meat and spit out the bones. I am happy to say that though not thoroughly filleted there was plenty of meat to digest on Sunday.