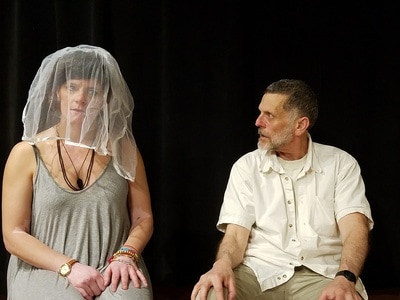 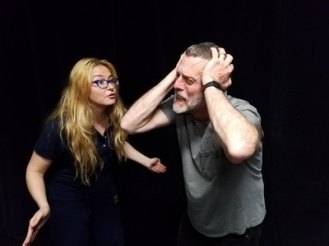 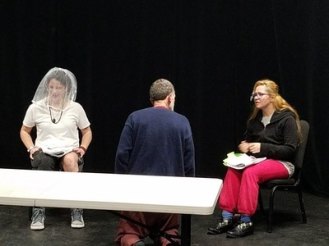 The world of the play takes place in a nursing home where Walter Weatherington, (Chaz McCormack), waits for his niece, Molly, to finally visit him as promised. The play opens with Walter sitting with title character, Ellen, portrayed by the lovely Luna Alago. The two characters bond over their shared agony waiting for their loved ones to finally come visit them. As the title suggests, Walter is only allowed to visit Ellen between fifteen minute intervals before the nurses catch them, as it is not allowed for residents of the nursing home to visit each other. It is revealed that Walter suffers from Alzheimer’s disease, as he sometimes mixes up the name of his nurse with his daughter, Molly, blaming it on the fact that they both look so similar. Walter’s condition worsens as the play progresses since he refuses to take his medication. Asides from Ellen, Walter’s loneliness is assuaged by the company of nurse Mandy, (Ceren Zorlu), and his only friend Jack (William Sours). While Walter’s Alzheimer’s intensifies, the line dividing imagination and reality begins to blur to the point that Walter struggles to decipher what is real and what is not.

In New York City — where an abundance of plays are being written and performed every day, from the streets of Broadway to off-off Broadway — Fifteen Minutes with Ellen sets itself apart. This wonderful play offers us a unique and rare storyline that details the lives and perspectives of the elderly living in a nursing home — tackling a social issue that many do not wish to face. This play explores the universal themes of love, existential crises and existence, suffering from incurable mental and physical illnesses, pain, guilt, betrayal, and loneliness. With very little representation of the elderly in media and close to no depiction of the trials and grave loneliness in which the elderly face living within the confines of a nursing home, Fifteen Minutes with Ellen couldn’t be a more important play. Fifteen Minutes with Ellen tells an untold story and gives a voice to a voiceless and often overlooked group. Fifteen Minutes bring to light the heartache that plagues the loved ones having to deal with a family member who suffers from Alzheimer’s disease. What is also great about a play like Fifteen Minutes with Ellen is that its casting offers opportunities for actors of an older age group. In theater and film alike where young actors are more desired and youth still emphasized, it is heartening to know that playwrights such as Andrew Selig are breaking out of this circle of exclusion to offer employment opportunities for older actors. Like all shows performed at Planet Connections Theater Festivity, Fifteen Minutes with Ellen benefits a charity of their own choice and collects donations for their cause after the performance. Appropriate for the themes of the play, Fifteen Minutes is benefitting the Retired and Senior Volunteer Program, a charity that provides aid, services, and employment opportunities for those aged fifty-five and older.

William Sours shines in his role as Jack, who is Walter’s sarcastic and acerbic companion whom consistently derides and mocks not only the nurses, but also the other seniors in the home. Sours’ portrayal of the snarky character is brilliant and finite with the detail of his facial expressions, his affected hoarse mocking laugh, his specific body movements, and incredible line delivery. Every movement of Sours’ body was so distinct and in character—no movement he made was ever random, it always held purpose to the role. Ceren Zorlu as Nurse Mandy also had a striking performance. She nailed the role with her animated facial expressions, astute reactions, vocal quality, and her quick switches from a caring to a condescending nurse. Chaz McCormack and Luna Alago as star-crossed lovers Walter and Ellen delivered a poignant and emotional performance that can bring any audience member to tears. McCormack and Alago’s portrayals of Walter and Ellen’s pain, distress, and confusion is poignant and their acting so effective to the point that their character’s emotional states are palpable. McCormack and Alago’s performances were realistic, believable, and heart wrenchingly touching. The entire cast of Fifteen Minutes with Ellen did a marvelous job in working together to represent these colorful characters in such a beautifully touching play. With very minimal set design, the performance of Fifteen Minutes emphasized dialogue, characters, and storyline. The simple lighting and sparse use of props accurately reflects the dismal and emptiness of the nursing home in which the story takes place. The interaction between the characters is a spectacle of itself with heavy focus on dialogue. All of the characters seem to have dull and unnoticeable costumes that reflect this world as well—with Mandy’s standard blue scrubs and Jack and Walter’s simple pants and t-shirts. The only character whose costume is colorful and stands out is Ellen’s, with her floral dress, white veil, and her choice to be barefoot rather than wear shoes. This choice shows how Ellen is different from the others in the home and how she is captivating for Walter in his state of loneliness and despair. Ellen offers refuge for Walter in his desperate and lonely wait for his precious daughter to keep her promise in paying him a visit. The dialogue in the play is so incredibly memorable and profound, with lines such as, “I’m only as smart as you make me,” and “I’d rather have a blurry TV than a blurry conscience.” Fifteen Minutes truly delivers with such a well-written and woven plot and stunning performance by the actors and tech team.

Fifteen Minutes with Ellen opened to the public with its first performance on June 14th and will be running throughout the festivity until its final performance date on July 3rd. This prophetic play is important for all to see with its mesmerizing characters, riveting storyline, and remarkable performance that move you to tears. Fifteen Minutes is truly a special and unique play that you really do not want to miss.