The Golden Girl by the Sea-Review by Jen Bush 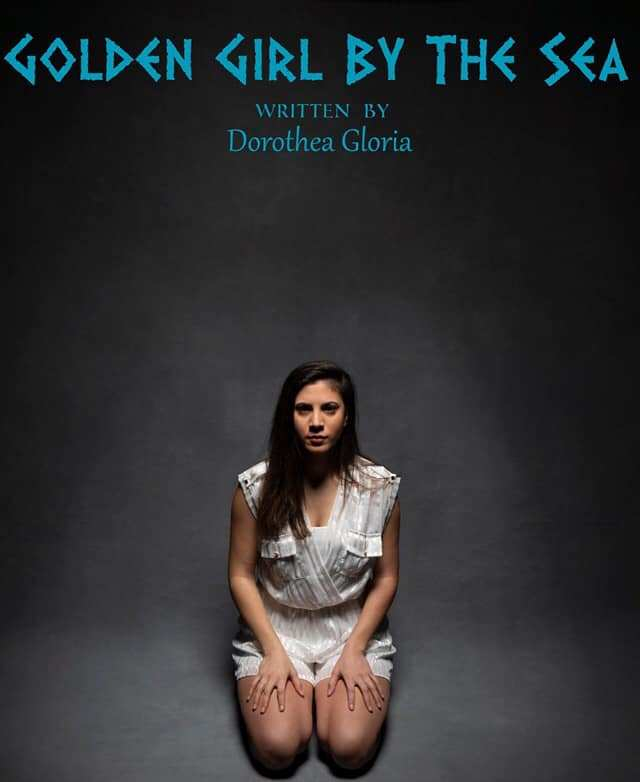 One might think seeing Greek Gods as exaggerated caricatures of themselves a la Gaston in Beauty and the Beast in a play with a solid premise driven by a silly and whimsical execution might not work.  It worked and it was golden!

The play opens with a track of multiple overlapping voices in a black box theater.  We meet the main character Xrysi on a beach in Santorini, Greece.   She is a lovely young lady in an appealing flowing blue dress.  In the distance she sees an enchanting mysterious woman who she declares that she is in love with.  Xrysi’s manner of speaking is very theatrical and poetic.  When a mysterious high priestess appears claiming that she can take Xrysi to her true love, Xrysi’s manner of speaking becomes more normal and casual demonstrating that the time period of the play is modern.  Suddenly, 9 more characters appear who are entwined and move together in visual poetry which they will continue to do for the rest of the play.  We learn that in order to find the one she loves, Xrysi much endure a set of trials prescribed by the Greek gods Aphrodite, Apollo, Dionysus, Zeus, Athena and Hera.  With each trial she completes, she receives a key to the door of the next god’s realm.

This play had elements putting in in danger of being campy and corny.  Fortunately between the solid cast and expert directing by Gwendolyn Snow and Adam Martin, it was a fun delightful romp through the realms of the Greek gods.  The play expressed themes of love, acceptance and tests of will.  My favorite realms were Apollo’s mansion of depressed muses and the sexual paradise of Dionysus.  All it took to lift the muse’s existential crisis was a Lady Gaga song.   As far as Dionysus’s realm, there is nothing like an eye opening simulated on stage orgy to take your mind off a pandemic!

This international cast wonderfully brought the work of Dorothea Gloria to life.  Incidentally, Ms. Gloria did a dynamic double dipping job of also portraying the ditzy insecure priestess guiding the main character through her journey.  Chrysi Sylaidi who is actually Greek, demonstrated her skillful acting chops by moving seamlessly from the comedic to the dramatic.  The actors portraying the Greek gods and goddesses did a nice job of embodying the strong and arrogant personas one would expect of deities.  The actors in beautiful motion gave a consistency and continuity to each scene.  They were almost like living scenery in perfect sync with each other.  They also did a fine job of portraying various characters in each realm.  This play was reminiscent of The Wizard of Oz and Alice in Wonderland in terms of the main character’s quest.  It’s no myth that audiences will find enjoyment in this lighthearted play with a beautiful message in the end.