Meshelle will be at Joe’s Pub at The Public Theater for one-night-only, July 26.

Winning awards at the Midtown International Theatre Festival some years ago, propelled Meshelle to now being on the marquee at The Pubic Theater’s ultra-trendy night spot.

Her show is phenomenal … but it’s she who is the REAL success story.

Her days are way-booked but she squeezed a few minutes for her fans at Drama-Queens.

OK, Indie Mom, tell us about yourself as an artist

I started off singing in my church , the perfect place for little brown girls to gain confidence in world that didn’t always celebrate us.   Musical Theater became my passion in college.  I was Dorothy in the THE WIZ, Deena Jones in DREAMGIRLS and in Ain’t Misbehavin.  I loved the energy of singing and acting and seemed to naturally get a laugh or two without great effort.  I always admired and adored the bold brilliance of Stand Up comedy.  I was dared by co-workers out  of college to share the stories that I shared at lunch, urged to go on stage at Mo’Niques Comedy Club in my hometown, Baltimore; for an open mic and reluctantly with my hand written quirky stories, I did.  It’s been the biggest love affair of my lifetime.  I never knew that I would break up with a PhD program, get married, have three kids and still be sitting at Stand Up’s door.  I am smitten.

Brilliant idea, this show … so share with us … what was the inspiration behind the Indie Mom of Comedy?

I was now a graduate school dropout, married with three kids and couldn’t wrap my mind around “my” truth.  I wasn’t the sassy, single professional student living in Philadelphia with my  faux Sex In The City meets Insecure tales anymore.  I was a long way from there, but wasn’t willing to let the “fearless girl” in me go quietly into the night.  She still had much to see and say, she just had a family in tow.  Yet, I never saw myself as those “helicopter moms” whose entire lives existed in motherhood and marriage.  I was independent, innovative and had my own “swag” aka individuality.  How could I communicate that motherhood didn’t translate to a loss of self, sexuality and sensuality? Not to mention, a thirst for adventure and growth.  I said, “ I am Indie”, like SUNDANCE but not a festival, just an Indie-Mom who is a Stand Up Comic.  Thus, the birth of the Indie-Mom of Comedy. 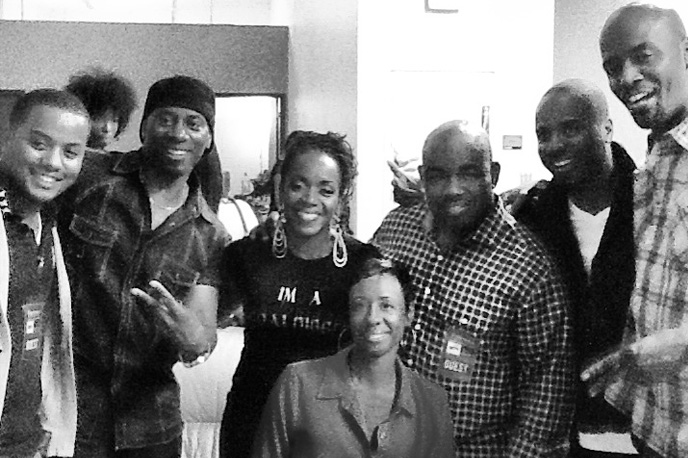 How does your family feel about “the indie mom?”

They see me “live it”. It’s not just a moniker, it’s a lifestyle, a truth I stand on. It’s definitely not for the thin-skinned who need constant coddling and attention.  While I am unashamedly nurturing, domestic and all things mom; I am very much a vivacious GAWD (Grown Ass Woman…Darling) . Seriously, I believe women are overly sacrificial and it has been embedded in our culture that a good woman, good mom; makes herself “last”. Bull$hytt!  I am a better person, better human, better mom and partner when “self-love” and “self-care” are the new normal. It’s been a paradigm shift for sure, because I also drank the “kool-aide” for a long stint and then life showed up and I realized that this self-sacrifice stuff for everybody else is madness.  Quite frankly, I think my kids admire my relentless pursuit of all things Indie-Mom of Comedy.

Is there a defining moment in your life/career that you can say still fuels you?

When I wrote my first one woman show (Nervosis) after giving birth to my second daughter.  I was nursing her between shows, with matinee and nightly performances.   My co-writer shared my premise with a seasoned  sit-com writer and her agent, they loved it and it landed me in LA, pitching my concept on 5 lots, Paramount being one of them.  At the time, I had no idea the magnitude of what was happening. I was a part of a triad; and “my life” was the backdrop.  It was overly rehearsed and I was lactating like crazy with my 6 month old in tow at a friends while I was sitting in front of development executives whose credits read like a TV Guide magazine editorial, Moesha, Girlfriends, etc.  So while it was colossal, I wasn’t all there, but it was simply a foretaste of what is to come! I know that for sure.  I am much keener and have lived through more adventure.  It assured me that I have much to offer as a performance artist, just stay on stage, hone my craft, write, and with persistence, and a work ethic that it insatiable, the door will open.

Public Theater … how does that feel?

All I can say is…Hamilton.  Really.  I mean some of the most amazing BROADWAY Productions have come by way of THE PUBLIC THEATER and to just walk through the doors and make that sharp left turn into one of the most lauded performance spaces in the world is jarring.  Joe’s Pub was where Adele and Amy Winehouse made their US debuts.  Not to mention the likes of Alicia Keys, BONO, Mos Def, Janelle Monae, John Mayer, Al Franken and Sarah Silverman, just to name a few.  It’s a dream to be performing my one-woman show there!  I am so grateful.

EVERYTHING!  I am so excited.  I will be performing my Diary…on September 22 (wait for it) on 42nd Street, theater row in the United Solo Festival.  It is one of the best dreams that I hope to never wake up from!  I am also very excited about my writing projects.  My writing partner and I have some amazing content to share, so let’s just say that crash course many years ago in Los Angeles was a great boot camp.  Stay tuned!

MESHELLE “The Indie-Mom of Comedy “